Posted on November 21, 2013 by TheshoeboxKitchen

Eleanor has only 3 days remaining as an 8-month-old, so it seems like a fitting time for our 11th hour eight-month post. Eleanor had a fun and full month which included: a trip to the beach with Mimi and Big, her first Halloween (she was a baby cow), a weekend with Lala while Momma and Daddy were out-of-town, and lots of fun outdoor playtime in the leaves with her big sister and new friends. Eleanor said her first words this month (dada and bahbah are the most frequent), she has four new teeth poking through on the top, and in addition to cruising all over the furniture she is now starting to stand up unsupported for a few seconds at a time.  She has started clapping, pointing, and waving all within the span of these past few weeks. She is also getting better with her pincer grasp and is picking up her puffs and (finally) eating them. It seems that she is at a real turning point in her development. These new skills and milestones are so fun to watch, but also tinged with some sadness as I see her turning the corner and leaving the baby days behind her with each new feat. Eleanor has been the sweetest, easiest baby, which makes it especially hard for me to let go of these halcyon days of her infancy and to accept that she will soon be a walker … and … then eventually a toddler (yikes!). But for now, we are savoring every second of  these precious, fleeting days of Eleanor’s first year and drinking in all of her delicious baby love while we still have it. 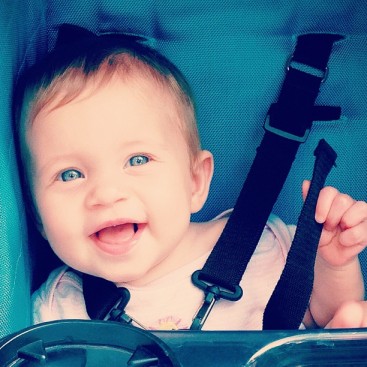 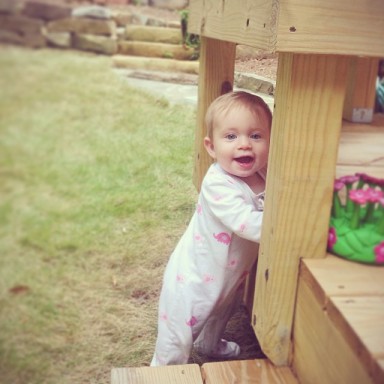 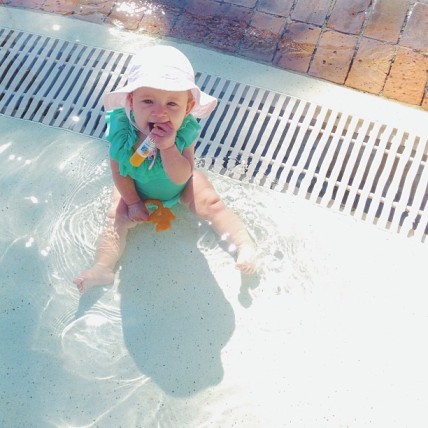 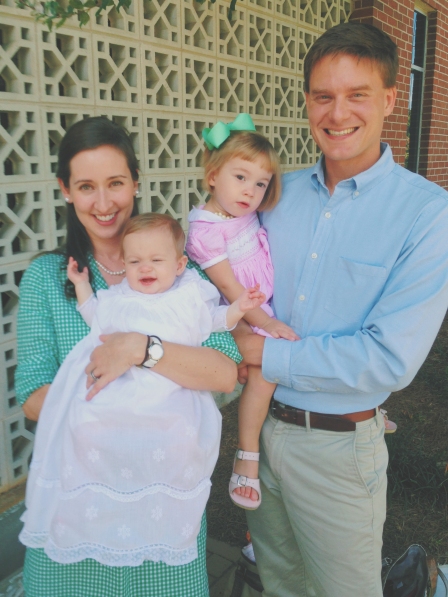 Eleanor had her dedication at church this past Sunday. It was a special day for our little family and we were so thankful to have all of the grandparents (and wonderful Aunt Katie) there to celebrate the blessing of this sweet baby with us! 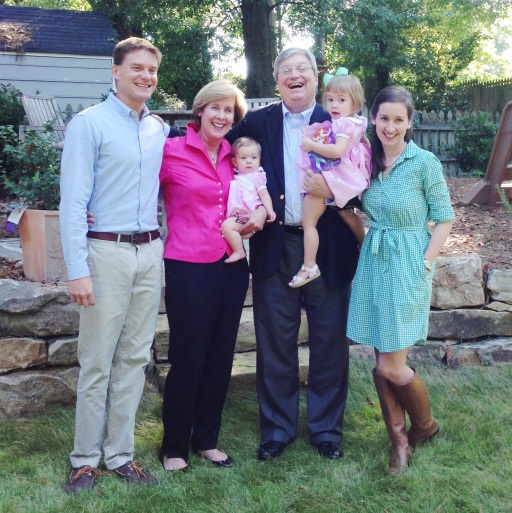 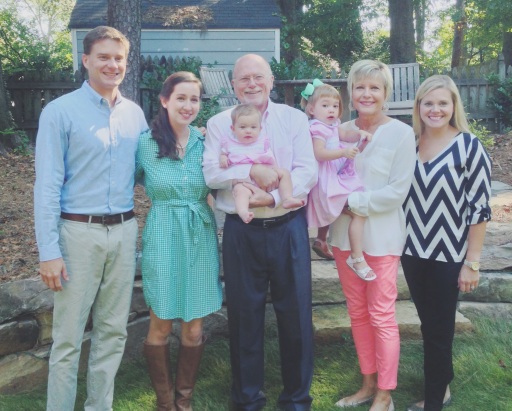 Eleanor wore the dress that her Momma, Aunt Cary and big sister Alice each wore before her

Thanks so much to our wonderful families and church for making this such a special day for us and a memorable celebration for baby Eleanor!

Alice started at a new school this past month and I’ve been excited to share some pics. She is doing a sweet little church preschool/co-op called Mustard Seeds and attends twice a week on Monday and Friday mornings. She really seems to adore going to school (or “class” as she calls it) and seeing her love it so much has made her seem so grown up!

These two photos are from her very first day of the year. She was so excited about that kitty cat backpack she would barely let me take it off to get her into the car seat.

When I picked her up after school that first morning she had a glowing report from her teacher and exclaimed, “I have fun in class!” when I asked her about the day. 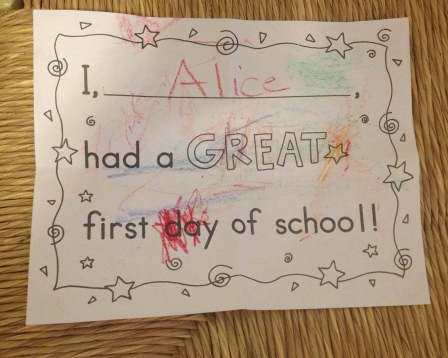 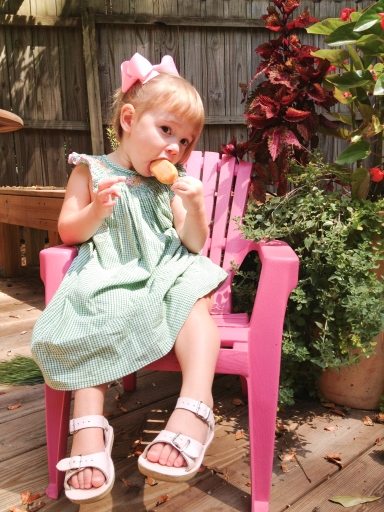 So, naturally, we came home and celebrated with ice cream. 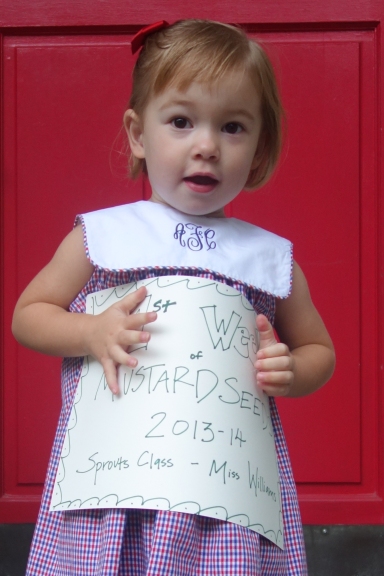 As the room mother for Alice’s class, I had the chance to go into school with her that first week to take some photos for the website. It was so fun to get a little sneak peek into what happens in their little classroom! I loved being a fly on the wall.

I must admit, I was a little surprised by how well Alice worked on tasks, followed instructions from the teacher, and played with the other children.

If someone had asked me before school started if Alice could play with play dough (as she is seen doing in the pictures here) I would have said, “no way. she’s too young. she’d just eat it!” As evidenced by these pictures, it is clear that I’ve underestimated her abilities.

After a few weeks of attending, I think it is safe to say that Alice is really in a groove with her new school. She has made some new friends, brought home some awesome artwork, and learned several new songs and a sweet prayer all in this first month! Looking forward to all that’s in store and all that she will learn in the months to come.

Baby Eleanor is seven months now. And what a month of milestones it has been! 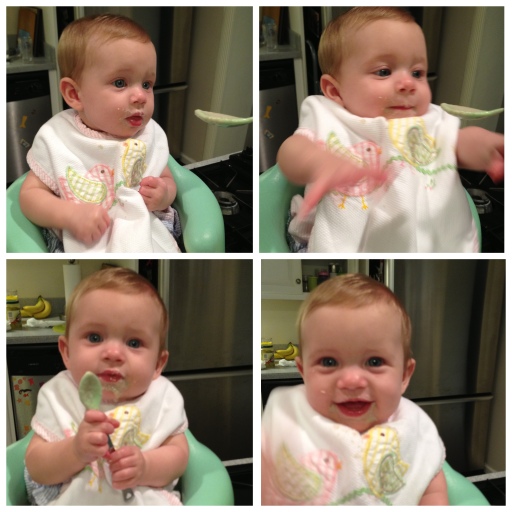 She started solids. Not crazy about them, but getting the hang of it slowly. 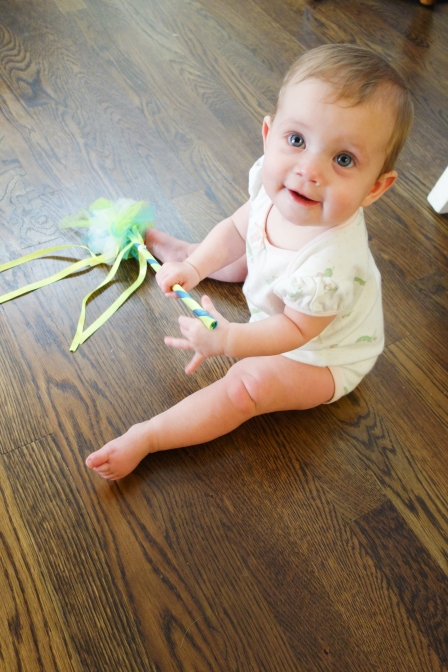 Likes playing in her johnny jump up and excersaucer

Loves outside play. The outdoors will soothe any of her sadness in an instant.

She cut her first two, tiny teeth on the bottom

and last but not least, she is puling up…on everything.

A big month, indeed, for little sister. She also had her dedication at church  this month and an overnight stay at Lala and Papa’s while Momma and Daddy went out of town for a wedding weekend. She loved them both! Happy seven months, Eleanor!

Posted on September 3, 2013 by TheshoeboxKitchen

Eleanor is officially six months old. How quickly a half-year of life has flown by! 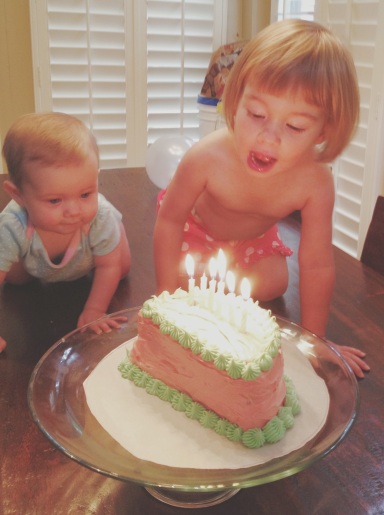 We celebrated her half-birthday with a half-cake. Sadly she could not eat it, since she does not yet eat solid food (but she will start this month!) Fortunately,  big sister was all too happy to help her consume it and blow out the six candles for her!

After several weeks of crawling, Eleanor leaned to sit up all by herself this month. It’s so fun to see her enjoying the view from this new, upright perspective. We think she likes it!

But she usually does not sit still for long. This little girl is on the go! She crawls everywhere and especially loves crawling and after Alice’s toys as is pictured above. She plays hard and, thankfully for us, she sleeps hard (as pictured below.)

Little sister received a great report from the pediatrician at her six month check up. She is just an ounce shy of 14lbs in weight and and 26inches in length. She is a tiny thing!

Posted on August 16, 2013 by TheshoeboxKitchen

Eleanor has been 5 months for several weeks now , so we are more than a little past due with the update, (we’ve had a busy month filled with travels, friends, and end of summer adventures) but I wanted to go ahead and post a few recent pics of her before she officially turns 6 months at the end of August. (Six Months?! Where has the time gone?) 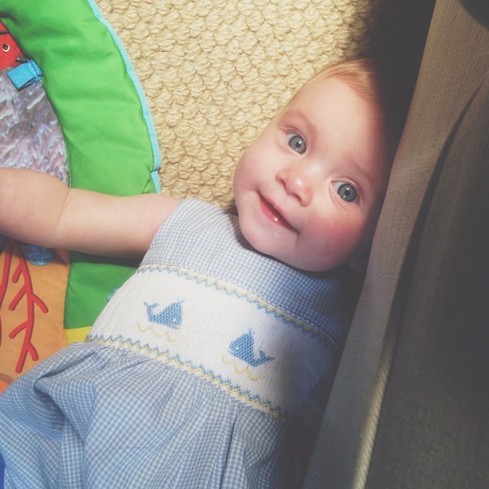 Eleanor is such a happy, easy going baby. She is very generous with her smiles and will pretty much grin at anyone who so much as looks in her general direction. Some of her favorite things right now include: Sophie the Giraffe, being held (she is finally a hip baby!), and watching her big sister Alice run wild.

Eleanor’s blue eyes seem to be one of  her most distinctive features at present. We get stopped in public often by people commenting on her “pretty blue eyes.”

In other exciting 5 month news, Eleanor has started crawling! I had hoped she would wait much longer than Alice did before she figured out how to move, but we had no such luck. Not to be outdone by big sister, right at 5 months (the same time almost to the day as Alice) Eleanor began to crawl. We are very impressed with her new found ability to move. It has taken no time at all for her to figure out how to crawl across a room and to get into to Alice’s toys. This has made for some interesting opportunitues in lessons on sharing for big sister. We hear the phrase, “no Eleanor, that’s mine!” about 20 times per day. 🙂 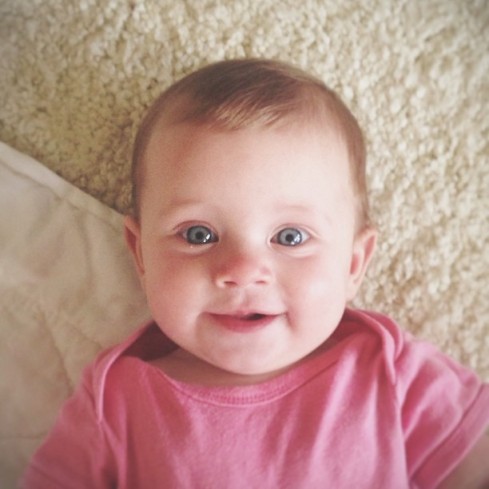 It’s been a great month and a great first summer for baby Eleanor. Stay tuned for some posts on our family’s summer fun and some updates on big sister, too!

Posted in Uncategorized | Leave a comment
Posted on June 26, 2013 by TheshoeboxKitchen

It is hard to believe that Eleanor is already four months old. At her 4-month appointment today she weighed in at 12lbs and measured 24.5in in length. Little sister is growing up before our very eyes! She rolls over constantly, holds her head up high for longer periods of time, and shows signs that she intends to crawl as early as her big sister (which gives us approximately 4 more weeks of having only one mobile child). She even gifted us with her first laugh this weekend while playing peep-eye with Momma, a bit of which we caught on tape:

As evidenced by the clip, Eleanor is one happy baby. She is such a sweet, easy going child and has been such a delightful addition to our little family. It is already hard for me to remember what our life was like before her! We are having the best time getting to know this blue-eyed baby better with each passing day. We love you baby sister!

Link | Posted on June 26, 2013 by TheshoeboxKitchen | 2 Comments
Fly on the Faulkner Wall
Create a free website or blog at WordPress.com.